Shift to LED lighting continues, as Halogen Bulbs to be banned in UK

The humble halogen light bulb will be banned from sale in the UK from September 2021, which will then be followed by fluorescent lights in the near future. The ban is part of the Government climate change plans, as Britain follows EU regulations intended to tackle climate change. 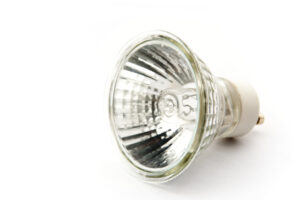 The plan will help continue the shift to low-energy LED light bulbs, which account for about two-thirds of lights now sold in Britain. It is expected to mean LEDs will account for 85% of all bulbs sold by 2030, officials said. Legislation is being brought forward into June, which will also include moves to phase out high-energy fluorescent lightbulbs – such as strip lights commonly found in offices – with a view to bringing an end to their sale from September 2023.

Energy minister Anne-Marie Trevelyan said: “We’re phasing out old inefficient halogen bulbs for good, so we can move more quickly to longer-lasting LED bulbs, meaning less waste and a brighter and cleaner future for the UK.

All of the bulbs affected have LED equivalents, though replacements for halogen pins are currently not as bright, and some existing fittings might cause bulbs to flicker and require an electrician to fix.

LED alternatives cost slightly more, but provide savings on electricity bills in the long run. Retailers will be allowed to continue selling their existing stock until it runs out.

The Government will also relabel bulbs to “simplify” their energy efficiency rating, effectively downgrading some from an A or above to a new scale down to a G.

It is hoped that the move will mean LED light bulbs will save 1.26 million tonnes of CO2, the equivalent of half a million cars.