‘Orange light’ can mean you pick the wrong box!

Following a recent site visit to a large factory, I was told an amusing story about the effect that the existing “orange” lights, from their old sodium high bays, was having on their quality control procedures.

The factory in question is a large foundry, producing high quality alloys for automotive and aerospace clients. The facility works around the clock, throughout the year, with the staff having grown accustomed to a very dreary orange-coloured light from their aging sodium high bays.

During a refurbishment program at the plant, an area was selected for a lighting upgrade to LED High Bays. Following a successful trial, the LEDs were installed above one of the darkest bays and the facility was transformed by white light. 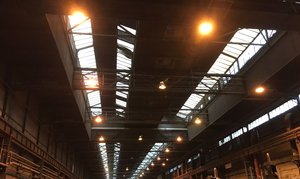 Some weeks after the LEDs were installed, the facilities manager approached the production manager to ask him what he thought about the new lighting? The response was not one that he anticipated;

“Our quality control figures have deteriorated dramatically” was the answer. “We are seeing large increases in failure rates during the fabrication process”. The facilities manager was bemused. How could the lighting have so drastically affected the quality control process?

Keen to investigate the matter further, the facilities manager went down to see what was happening. Once at the production area, he could see that the metal parts were tooled and then separated into different ‘bins’ depending on their quality. Each bin has writing on it in a different coloured pen. The failed units were being put in the bin with the ‘red writing’. Once the bin was filled up, it was removed to a holding area, prior to being returned to the raw materials area and ultimately melted down again.

The production manager was still adamant that the number of failures had increased since the lights were installed, so the facilities manager went to the holding area to see if he could identify the reason. It soon became obvious what the problem was….the holding area still had the old ‘orange’ sodium lights and, with such poor colour rendering, the ‘red writing’ on the side of the bins was virtually invisible.

The conclusion was, that failure rates had not increased, but rather the forklift drivers could not see the ‘red writing’ on the side of the bins under the old lighting and therefore never took the ‘failed bin’ to the holding area.

With the much higher colour rendering from LED lighting, the bins were being correctly identified at the production area, hence the increase in numbers of failures. The failures were there all along; it was just that no one could see them!

For more information or to request a meeting call Aidan Brown on +44 1242 250633 or email: info@ledindustriallighting.co.uk

Posted in Uncategorized | Comments Off on ‘Orange light’ can mean you pick the wrong box!