The internet of things, or IoT, is a system of interrelated computing devices, mechanical and digital machines, objects, animals or people that are provided with unique identifiers (UIDs) and the ability to transfer data over a network without requiring human-to-human or human-to-computer interaction.

A “thing” in the internet of things could be a person with a heart monitor implant, a farm animal with a biochip transponder, a vehicle that has built-in sensors to alert the driver when tire pressure is low or any other natural or man-made object that can be assigned an IP address and is able to transfer data over a network.

Increasingly, organisations in a variety of industries are using IoT to operate more efficiently, better understand customers to deliver enhanced customer service, improve decision-making and increase the value of the business.

An IoT ecosystem consists of web-enabled smart devices that use embedded processors, sensors and communication hardware to collect, send and act on data they acquire from their environments. IoT devices share the sensor data they collect by connecting to an IoT gateway or other edge device where data is either sent to the cloud to be analysed or analysed locally. Sometimes, these devices communicate with other related devices and act on the information they get from one another. The devices do most of the work without human intervention, although people can interact with the devices — for instance, to set them up, give them instructions or access the data.

The internet of things offers a number of benefits to organisations, enabling them to:

IoT encourages companies to rethink the ways they approach their businesses, industries and markets and gives them the tools to improve their business strategies.

There are numerous real-world applications of the internet of things, ranging from consumer IoT and enterprise IoT to manufacturing and industrial IoT (IIoT). IoT applications span numerous verticals, including automotive, telco, energy and more.

In the consumer segment, for example, smart homes that are equipped with smart thermostats, smart appliances and connected heating, lighting and electronic devices can be controlled remotely via computers, smartphones or other mobile devices.

Wearable devices with sensors and software can collect and analyse user data, sending messages to other technologies about the users with the aim of making users’ lives easier and more comfortable. Wearable devices are also used for public safety — for example, improving first responders’ response times during emergencies by providing optimized routes to a location or by tracking construction workers’ or firefighters’ vital signs at life-threatening sites.

In healthcare, IoT offers many benefits, including the ability to monitor patients more closely to use the data that’s generated and analyse it. Hospitals often use IoT systems to complete tasks such as inventory management, for both pharmaceuticals and medical instruments. 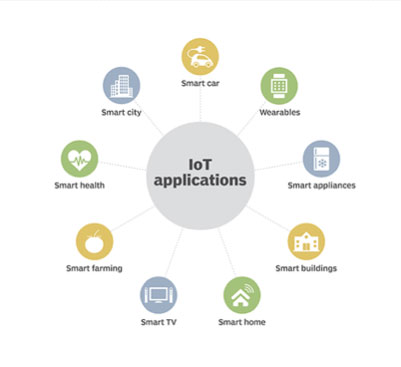 Smart buildings can, for instance, reduce energy costs using sensors that detect how many occupants are in a room. The temperature can adjust automatically — for example, turning the air conditioner on if sensors detect a conference room is full or turning the heat down if everyone in the office has gone home.

In a smart city, IoT sensors and deployments, such as smart streetlights and smart meters, can help alleviate traffic, conserve energy, monitor and address environmental concerns, and improve sanitation.

The internet of things connects billions of devices to the internet and involves the use of billions of data points, all of which need to be secured. Due to its expanded attack surface, IoT security and IoT privacy are considered as major concerns.

One of the most notorious recent IoT attacks was Mirai, a botnet that infiltrated domain name server provider Dyn and took down many websites for an extended period of time in one of the biggest distributed denial-of-service (DDoS) attacks ever seen. Attackers gained access to the network by exploiting poorly secured IoT devices.

Because IoT devices are closely connected, all a hacker has to do is exploit one vulnerability to manipulate all the data, rendering it unusable. And manufacturers that don’t update their devices regularly — or at all — leave them vulnerable to cybercriminals.

However, hackers aren’t the only threat to the internet of things; privacy is another major concern for IoT users. For instance, companies that make and distribute consumer IoT devices could use those devices to obtain and sell users’ personal data.

The future of IoT

There is no shortage of IoT market estimations. For example:

For more information or to request a meeting call Aidan Brown on +44 1242 250633 or email: info@ledindustriallighting.co.uk