Vertical farming in the UK is growing in importance. It is the practice of producing crops and medicinal plants in stacked layers. Typically, these will be in an indoor environment, such as a skyscraper, warehouse or shipping containers.
The concept developed in 1999 by the ecologist Dickson Despommier, is now taking root in an industrial estate in Scunthorpe. At this radically different farm, a vast warehouse has been filled with racks stacked up to 40ft, illuminated by an eerie pink light. The farm looks more like a sci-fi film set, than a farm.

It is run by Jones Food Company, and has been designed to grow herbs all year round in the temperature, air, light, water and nutrition-controlled environment. The system is at the cutting edge of technological advances, using hydroponics, artificial light, temperature and air control, pressure and contamination control.
In the US, Aerofarms has invested $30 million into a green revolution that seeks to produce more crops in less space, but whether is it’s economically viable is an open question.

Artificial LED lighting at the heart

At the heart of the new farming systems, is the use of artificial light. The source of this light is LED technology. The farm in Scunthorpe has over 7.6 miles of LED lights. Their pink glow illuminates 5,120 square metres of growing space – the equivalent of 26 tennis courts. The beauty of this controlled environment is that every plant will get the same amount of light, nutrition and water to give consistent quality of crops.

Historically, sodium lighting has been used in greenhouses and vertical farm pioneers. This negated the environmental benefits and made the concept extremely expensive. The advent of LED lighting, has seen those costs tumble. With huge amounts of research, LEDs have been developed specifically to assist in the growing cycle of plants. Different coloured lights have different roles to play in the plants’ life cycles. Red light helps to promote leaf coverage, whereas blue light promotes plant structure and leaf mass.

The LEDs, for example, can be turned up or down at will and, because they do not give out lots of heat like old filament bulbs, they can be kept close to the plants for optimal light absorption. 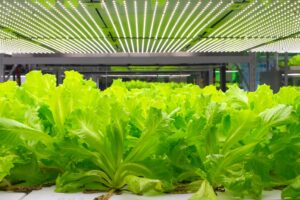 The intensive nature of the farming methods, means that less land is required to produce plants. The controlled environment means no pesticides or fertilizer is used (with no harmful chemicals entering the ground and water). The crops can be grown all year round and are not affected by adverse weather conditions, guaranteeing high and consistent quality of food. Perhaps the key environmental benefit of vertical farming is that it uses far less water. One company, Urban Farms, estimates that (in an example using lettuce) it uses only 5% water consumption compared to traditional growing methods in fields.

Furthermore, with increasing numbers of people living in cities, it would mean produce would not need to be imported and there would be a significant reduction in the number of air/road miles that the produce would need to travel. Globally, some 30% of harvested crops are wasted due to spoilage and infestation.

All this hinges on whether new technology has solved the problem of cheap and reliable artificial light. The UK Agriculture and Horticulture Board sees the arrival of high-quality LED technology as a “seismic shift that is set to change fundamentally how we grow plants”.

In theory it is possible to grow practically anything inside – but that’s not always a good idea. It’s more cost-effective to stick to quicker-growing crops that yield a high market value. Herbs, baby greens for salad and edible flowers, for instance, fetch a lot more per kilogram than certain root vegetables, which are more likely to be grown outdoors the old-fashioned way for some time yet.

There are a number of large operators in the Vertical Farm sector, examples include Aerofarms in the US, Urban Crops in Europe, Thanet Earth in UK. These are all hydroponic farms and Thanet Earth has been operating for nearly 10 years from their base near Gatwick. This facility produced 225 million tomatoes in 2013, around 12 per cent of the UK’s total crop in that year.

At present, high value crops are being grown in these new artificial environments, but in future other crops such as wheat or barley could be grown in warehouses rather than fields. It is a tantalising glimpse of the future of farming. Is it a fad or the future, only time will tell. However, vertical farm operators will tell you that inside the system, every day is a summer day without a cloud in the sky.

For more information or to request a meeting call Aidan Brown on 01242 250633 or email: info@ledindustriallighting.co.uk